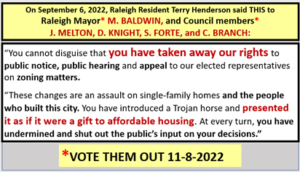 The Raleigh Mayor and City Council have recently enacted amendments to the zoning ordinance that abolish property rights and protections that have made Raleigh the admirable city it is today.

The objective of this website is to provide factual information regarding Raleigh’s Missing Middle zoning policies and their detrimental effect on traditional single-family neighborhoods across the entire city of Raleigh.

With the passage of recent Missing Middle changes, Raleigh Mayor Mary-Ann Baldwin and the incumbent city council* have set in motion harmful policies that will increase density and destabilize neighborhoods in nearly every section of the city but will not truly address the challenge of affordable housing as they claim.

This legislation was passed without meaningful public input during Covid and presented as “text changes.” In fact, the Missing Middle amendments are a sea change for development in the city and have given unprecedented power to developers to build virtually anything anywhere anytime. Missing Middle effectively does away with zoning in vast parts of the city and increases density by double, triple or more. For example, what was R-4 (4 units per acre) is now effectively R-21 in certain areas.

Finally, these changes have done away with public notice, public hearings, and review by appeal to the council. They have ceded their responsibility to staff who, after checking for details, are required to approve the project simply if it meets the requirements set out in the Unified Development Ordinance. By right, developers are now no longer accountable to the public.

The Missing Middle should be repealed and there must be a return to Raleigh’s previous zoning processes.

Please plan to visit this site often for the latest information and developments.

Save Our Neighborhoods Steering Committee